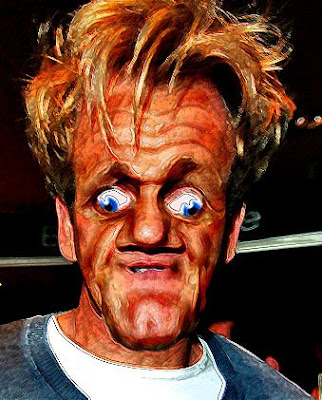 Gordon Ramsey's Botox hell
Vaz Sayed
Gordon Ramsay has had BOTOX on his craggy chin - after X Factor pal Simon Cowell baited him about it. The under-fire chef - born with the distinctive lines and cleft - revealed a make-up artist had already quizzed him on his horrific "car crash injuries".
Ramsay, 52, said: "It's Simon's fault. He leaned over and prodded my chin saying, 'Mate, you've got to do something'. I was like, 'F*** off!'. I've always looked like Freddy Krueger, but more people were commenting so I did it. Botox. And no one has f****** noticed."
Gordon also admitted he had "stared into the abyss" in a grim year that saw claims of an affair - which he denied - and the near collapse of his business. He said he "screwed up" and needed to grow up but added: "I'm fighting back."
Posted by Jef Clark at 9:21 pm