A few posts ago I mentioned a book by Steve Salerno, SHAM: Self Help and Actualization Movement - How the gurus of the self-help movement make us helpless. I've just moved into a new job, and as a token of appreciation from the employer I was leaving I was given a book voucher. (I was told they gave me a voucher rather than choosing a book for me, as they know I've read almost everything and I have very particular tastes... not that they knew nothing about me and could not be bothered to think about it, as I had originally assumed.) I decided to hunt down SHAM, and was successful.

I've just finished the introduction and already it is apparent that Salerno has a great understanding of fallacies. For example, Salerno points out the typically circular - Begging the Question - type of points made by SHAM authors:

This is not to say that all SHAM rhetoric is patiently false. In fact, there are whole categories of self-help precepts that can't possibly be disputed. That's because they're circular - the guru who espouses them is saying the same thing in different ways at the beginning and end of sentence. The conclusion merely restates the premise. Here's a perfect example from Phil McGraw's New York Times number one best seller Self Matters: "I started this process by getting you to look at your past life, because I believe that the best predictor of future behavior is past behavior. That being true, the links in the chain of your history predict your future." The "that being true" makes it sound as if McGraw is rousing to some profound conclusion. But he isn't. The part after "that being true" merely repeats what he said in the first sentence, with slightly altered wording. It's not a conclusion at all. It's what logicians call a tautology. 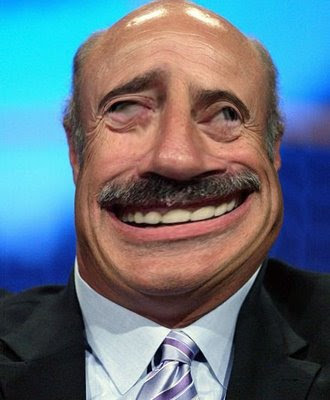 (Dr. Phil's facial expression, when asked whether he has any data that demonstrates the efficacy of his work, speaks for itself.)

The other technique SHAM authors are fond of is Gibberish:

Other SHAM kingpins, or ambitious pretenders, achieve a certain contrived plausibility by using puffed-up, esoteric-sounding jargon. In August 2004, Dan Neuharth, PhD, the author of Secrets You Keep from Yourself: How to Stop Sabotaging Your Happiness, told the readers of magazine First for Women that "avoidance is a knee-jerk response to a core fear that threatens your ego." Translation: We avoid things we're really afraid of.

It's one of those books that has me nodding in agreement every page. The question I put to people I know with these self-help books in their house is: "How come you have more than one?"
Posted by Theo Clark at 5:25 pm