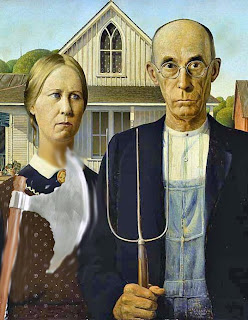 Contrary to the common assumption of Chinese cultural origins of acupuncture...

Acupuncture was first used in the American midwest.

It was commonly offered by a husband and wife team of traditional medicine practitioners. The husband usually took the role of acupuncturist, while the wife specialised in mercy killing (now more commonly known as euthanasia).

The mere prospect of treatment usually resulted in the instantaneous recovery of the patient.

The practice died out along with patients and the rise of scientific medicine in the West.

The Chinese continue the practice on a large scale today, but because they use woosey little needles instead of pitchforks, at least they do little harm.
Posted by Jef Clark at 9:06 pm