How the rich and green live on credit 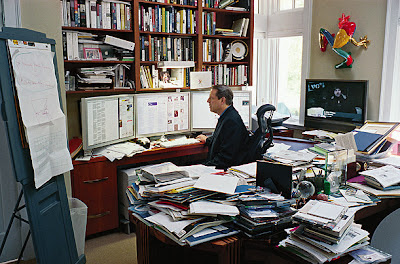 This pic from a photo essay here.

This is how the Gorester is able to run three giant personal computer monitors with a clear carbon-conscience.

Monitor 2: He has paid a logging company $100 to plant ten plantation trees on his behalf after they have clear-felled their next 10,000 hectares of old-growth forest (a win-win situation, as they would have planted the trees anyway). In 200 years the trees will have fixed the CO2 produced by monitor 2 in the course of a year or two of use by Gore. The logging company is allowed to log the new plantation when it matures, but they have to promise faithfully to leave Al's trees alone so that the carbon they have fixed will remain sequestered from the atmosphere.

Monitor 3: Well... every computer must have one monitor, and a giant monitor is not such an indulgence when one is FILTHY RICH.

Seriously... that is one impressive set-up. I would have three giant computer monitors myself if I could afford it... and had the space... and had tickets on myself... and no self-restraint.
Posted by Jef Clark at 5:13 pm