U2 are in town 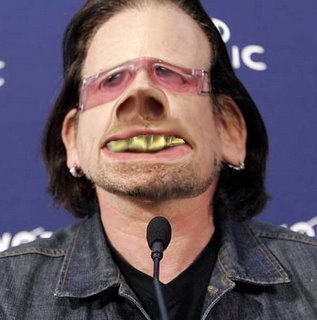 ...and the music is secondary to the celebrity (actually, the music comes after the money too). That LAME version of Appeal to Authority, Appeal to Celebrity, has arrived, with the arrival of U2. In less than a week Bono has used his celebrity to:

…campaign for the terrorist suspect David Hicks to be released from Guantanamo Bay.

And for wealthy countries to:

Now I'm not commenting on either of these particular issues per se, just on the media's complicity in giving these hyper-rich venture capitalists, who pretend to be musicians but in actual fact are merely hypocritical sellouts the air they so desperately crave. (Regulars know how much we love to be told what to do by celebrity hypocrites.)

Let’s see if Bono has time from away from his busy money making schedule to take the Prime Minister up on his offer:

The Irish rock star, whose band opens its Australian tour in Brisbane tonight, says he wants to talk to Mr Howard about boosting Australia's aid to poor countries…

Mr Howard said while there had been no approach to his office for a meeting, he would be happy to accommodate the rocker.


Tags: Fallacy, Appeal to authority, Appeal to celebrity.
Posted by Theo Clark at 12:30 am