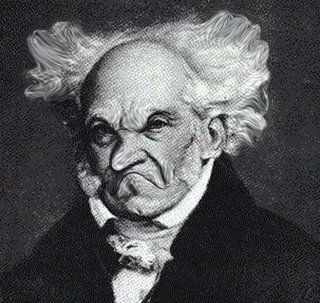 Brainiac Arthur Schopenhaeur has featured here before. I do like his aphorisms... food for thought... here's one:

That a man shall attain this inner unity is the impossible and inconsistent pretension put forward by almost all philosophers. For as a man it is natural to him to be at war with himself as long as he lives. While he can be only one thing thoroughly, he has the disposition to be everything else, and the inalienable possibility of being it. If he has made his choice of one thing, all the other possibilities are always open to him, and are constantly claiming to be realised; and he has therefore to be continuously keeping them back, and to be overpowering and killing them as long as he wants to be that one thing. For example, if he wants to think only, and not act and do business, the disposition to the latter is not thereby destroyed all at once; but as long as the thinker lives, he has every hour to keep on killing the acting and pushing man that is within him; always battling with himself, as though he were a monster whose head is no sooner struck off than it grows again. In the same way, if he is resolved to be a saint, he must kill himself so far as he is a being that enjoys and is given over to pleasure; for such he remains as long as he lives. It is not once for all that he must kill himself: he must keep on doing it all his life. If he has resolved upon pleasure, whatever be the way in which it is to be obtained, his lifelong struggle is with a being that desires to be pure and free and holy; for the disposition remains, and he has to kill it every hour. And so on in everything, with infinite modifications; it is now one side of him, and now the other, that conquers; he himself is the battlefield. If one side of him is continually conquering, the other is continually struggling; for its life is bound up with his own, and, as a man, he is the possibility of many contradictions.

For those who couldn't be bothered wading through "Schoppy" (as I like to call him), have a gander at this phrase from Bob Dylan's lyrics to Maggie's Farm, viz: "Well, I try my best to be just like I am."

I think Dylan really nails it... and his tunes are way better than Schoppy's.