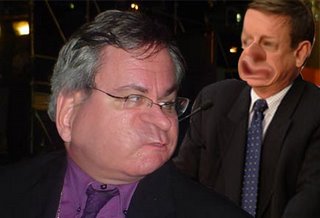 Andrew Bartlett (Australian Democrat senator for those who don’t know) is engaged in a bit of political biffo with a Queensland government minister at the moment. Rob Schwarten (pictured trying to avoid eye-contact with "Bulldog" Bartlett), the Minister of Public Works and Housing, is threatening to cut funding to mistreated public housing.

Bartlett makes some good points, but then goes a False Analogy:

It all reeks to me of a parent trying to punish a naughty child and cutting off their money until they ‘learn their lesson’.

Not really. It's more like trying to have some kind of real consequence for vandalism (not that I'm endorsing it or saying it'll work mind you). He follows that up with some Motive Impugning:

…Personally, I think taking the trouble to work in an ongoing way with the Council is preferable to either of those, even if does take more work and doesn’t go play so well in the media.

Not to be outdone, Schwarten responds in a churlish manner, and accuses Bartlett of Burdening him with the Solution (somewhat ironic, given he is the Minister of Public Works and Housing, the solution is his job…).

“Senator Bartlett is good at whingeing but when it comes to offering up solutions to rampant violence, vandalism, overcrowding and destruction of public facilities, he has no answers,” Mr Schwarten said.

“Simply bobbing up for a whinge and nothing else every now and again might make the Democrats feel all warm and fuzzy but it doesn’t stop crime, it doesn’t put a roof over people’s heads and it doesn’t help stop unchecked vandalism.”

You tread a fine line when accusing someone of the Burden of Solution. I don't think it's reasonable to accuse Bartlett of this, in this instance. Bartlett's media release continues:

“That housing Minister Robert Schwarten is meeting with the council today is a step in the right direction, but open communication and consultation with the community to address problems should have been happening long before now.”

...Senator Bartlett visited Woorabinda on Monday and met with the council and community members.

“There has been some progress in aspects of housing management in the community in recent times and this action risks reversing that progress,” Senator Bartlett concluded.

Not much of a solution admittedly, but it's a very complicated problem.

The "feel all warm and fuzzy…" remark made by Schwarten refers to the partner of the Burden of Solution - Sanctimony. I wouldn't accuse Bartlett of Sanctimony, but it is a label that is often deserved of those with left-wing leanings (look at our examples). (Right-wingers are too busy having money fights and shooting their guns at stuff to have time to feel all warm and fuzzy.)
__________
Tags: Fallacy, False analogy, Impugning motives, Burden of solution.
Posted by Theo Clark at 9:05 am