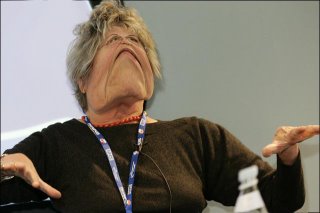 This woman is the ultimate example of LAME. There are very few people on the planet I loathe; Germaine Greer is one of them. Germaine's opinions are one big FIGJAM. Her pusillanimous response to Steve Irwin's death:

What Irwin never seemed to understand was that animals need space. The one lesson any conservationist must labour to drive home is that habitat loss is the principal cause of species loss…

Steve Irwin's environmentalism wasn't particularly sophisticated; it merely consisted of doing stuff, and encouraging others to do the same:

"I consider myself a wild-life warrior. My mission is to save the world's endangered species." Irwin bought "large tracts of land" in Australia, Vanuatu, Fiji and the United States, which he described as "like national parks" and stressed the importance of people realising that they could each make a difference. … He founded the Steve Irwin Conservation Foundation, which was later renamed Wildlife Warriors Worldwide, and became an independent charity. He was described after his death by the CEO of RSPCA Queensland as a "modern-day Noah", and British naturalist David Bellamy lauded his skills as a natural historian and media performer. Irwin discovered a new species of turtle that now bears his name, Elseya irwini — Irwin's Turtle — a species of turtle found on the coast of Queensland…. He also helped to found a number of other projects, such as the International Crocodile Rescue, as well as the Lyn Irwin Memorial Fund, in memory of his mother, with proceeds going to the Iron Bark Station Wildlife Rehabilitation Center… He had urged people to take part in considerate tourism and not support illegal poaching through the purchase of items such as turtle shells, or shark-fin soup...

What useful contribution have you made Germaine?

Those of us who live with snakes, as I do with no fewer than 12 front-fanged venomous snake species in my bit of Queensland rainforest…

Oh, you've bought up your own private bit of rainforest, for your occasional visit… how admirable.

Steve hasn't even been buried yet, but not willing to wait for everyone to look at her, Germaine ends with this:

The animal world has finally taken its revenge on Irwin, but probably not before a whole generation of kids in shorts seven sizes too small has learned to shout in the ears of animals with hearing 10 times more acute than theirs, determined to become millionaire animal-loving zoo-owners in their turn.

Better that our kids turn into a get out there and do something bloke like Irwin than a bitter old bag like Greer. (How much did she write about him whilst he was alive to defend himself I wonder?) She sickens and disgusts me.

Germaine is pictured demonstrating the final stage of her thought process; specifically how to extract her suppository shaped head from an uncomfortable spot.
_______________