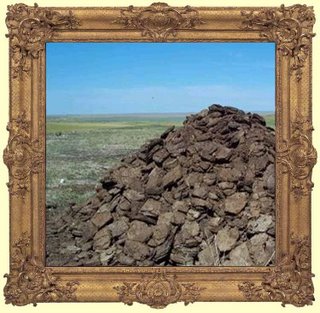 Since this post I’ve been thinking about how we are to decide whether something is art or not. Aesthetics has never been an area of philosophy that holds a particular interest for me (too much navel gazing), but a comment on the last post was quite instructive with regard to the criteria by which we can demarcate art from pseudo-art. There are certainly going to be grey areas, but surely there must be a point where art ends, and pointless tripe begins?

Specifically, the metaphorical use of the word artistic is quite revealing. For example, when we use the word “artist” to describe a sportsperson, such as Rodger Federer, what do we mean? Why is he artistic when he plays tennis?

I suggest that it’s because he is clever, he plays with great skill within his sport, (reaching a level that can only be reached by a select few who have trained to a similar degree and are naturally talented), he plays with great imagination and flair, and so on. Federer possesses a certain je ne sais quoi.

Surely the points listed above, if implied in the metaphorical use of art, are necessary criteria for real art? This list of qualities I suggest is specific to tennis/sport and is quite narrow. Without a doubt there would be more criteria we could add to actual art. (For example, art should generally have a recognisable point - meaning. If the meaning is only apparent to the artist, then there's not much point in exhibiting it.) I wouldn’t think that it is necessary that art fulfils all the criteria, but it should fulfil the majority to some degree.

Art doesn’t have to be beautiful and I don’t have anything against images that are shocking per se. But being shocking for the sake of it is LAME. I guess I just have a problem with self indulgent and vacuous fools who don’t recognise this quality in themselves.

Maybe I’m being too harsh, WRT demarcation? The criteria I suggest might not demarcate art from pseudo-art, but it will demarcate good art from shite. Using the sporting analogy again, we can all be artistic (to a degree) when playing sport, but the vast majority will never reach the level of a master such as Federer. Most of us are rubbish and with luck, occasionally fluke a moment of brilliance (always with no-one there to witness of course). The same can be said of most of our artistic achievements I’d bet.

The pig fetish work (see my previous post) might qualify as legitimate art, but if we accept the criteria I suggest (and I welcome other suggestions), it means it is shite at the very least. (It’s not clever, lacks imagination or flair, it has no skill and no point – unless we treat the artist’s statement with seriousness.)

This wikipedia entry is quite informative. It would suggest that much of what I’ve said is wrong, in that as long as someone believes it’s art, then it is. The unfortunate problem with this explanation for what art is, is that it necessarily rules out nothing, and therefore explains nothing. If anything is art, then everything, literally, is art. The term "art" losses utility and becomes a useless and unidentifiable concept.

Then again, if anything is art… an untalented git such as myself could be an artist - I call the artwork above - merde de vache.

We seem to be having a lot of reference to the French in our posts lately, so I have kept the trend going.