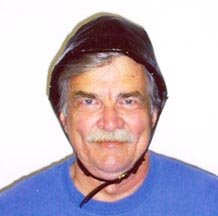 We are in the middle of a telepathic war with alien invaders. However, it is possible to defend oneself with the appropriate technology:

The "thought screen helmet" is our only defense in a "telepathic war." I call this device a "thought screen helmet" because it prevents aliens from performing any kind of mental control over us It blocks out all alien thought so humans can no longer be manipulated or controlled, and it prevents aliens from completing mental communication with us so people cannot be abducted.

The helmet from Stop Alien Abductions (as worn by abductee Jon Locke - pictured) costs you $35 (US) to build, but as they say, it is essential if we are to win the telepathic war against the alien invaders. With that in mind, I though it prudent for me to create my own version of their model. I intended it to with a cheaper, but nonetheless, effective helmet of my own. It is made with electrical tape and an ice cream container.

However, as can be seen from the slide show above, it didn't really work. Last night an alien (or rather, Extra-Terrestrial) simply pulled the helmet off my head. I was then "sucked" through a black hole (to another dimension) where the aliens did unspeakable things to me. They then returned me to the Earth and I woke up in my bed, as if nothing had happened. I've obviously repressed my memory of the experience, but that's okay by me. I never want to speak of it again. (Unless a psychoanalyst charges me by the hour of course.)