WTF? Fallacy of the year 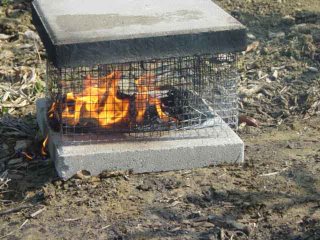 If there's a stronger case than this for creating the WTF? Fallacy, then I'd like to hear of it. This has been getting much attention from bloggers of late. Supposedly this "experiment" demonstrates that a jet-fuelled fire couldn't have caused the world trade centre towers to collapse.

Spooked911, the poster, though an ingenious experimentalist, is not quite so proficient WRT the scientific report genre (though he claims he's a molecular biologist!). I'll help him out by using his text but following a format loosely based on what I get 12 year olds to do:

I set up the following experiment using steel rabbit fencing as the steel structure supporting a heavy cement block. If kerosene/jet fuel/hydrocarbon fires can indeed cause steel structures to collapse, it should be quite simple to show this in an experiment-- right?

That a fairly flimsy steel structure will not distort and bend and collapse very easily from a simple hydrocarbon fire. 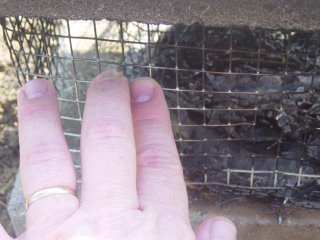 Then fire burned for about twenty minutes, and toward the end, I put my foot on the structure to see if it would extra weight. It still did. The structure held up fine after the fire died…. After the fire was hot, the "columns" were not hot at all… [see picture - he can touch it].

In a second experiment, I used the same wire fence and block set up, but increased the amount of "airplane damage", added in newspaper all around the inside of the structure, and soaked everything thoroughly with kerosene. In this expt, the fire was more intense and lasted significantly longer, but... the structure held up just fine.
What I conclude is that a fairly flimsy steel structure does not distort and bend and collapse very easily from a simple hydrocarbon fire. And thus, it is not clear why the much stronger steel columns in the WTC towers weakened so much from fires that the towers underwent global collapse.

It's a simple model to shed light on a complex system. Scientists do this sort of thing all the time. It's their bread and butter. I did not draw any elaborate conclusions. I did not say this proved anything. Moreover, I invited people to try their own experiment, and as far as I can tell, no one has. I think it's sad that this has become the subject of such ridicule. Moreover, note I said nothing political here, nothing about Bush. It's just an experiment that I thought was interesting and worth sharing. I am indeed a biomedical scientist-- a molecular biologist, not an engineer. But I have friend who is an engineer who thought what I did was cool.

You sure your "friend" isn't your mum (that's "mom" for you "seppos")? He goes on to defend himself against accusations that he is a "crankpot" [the spawn of Mr Crank and Miss Crackpot!]:

…what's funny to me is how they point to this experiment as primary evidence that I'm a kook or crankpot-- but not to posts where I say the 2nd hit videos were faked, no plane hit the WTC. Why does THIS post amuse them so? It is just because it is easy to look at the pictures as opposed to, say, reading and thinking critically?

I fell off my chair when I read that.

Update 2 - I didn't know it at the time (as I hadn't thought of it yet), but Spooked911 gives us an excellent example of the GIGO fallacy. He makes this conclusion based on his garbage experiment:

What I conclude is that a fairly flimsy steel structure does not distort and bend and collapse very easily from a simple hydrocarbon fire. And thus, it is not clear why the much stronger steel columns in the WTC towers weakened so much from fires that the towers underwent global collapse.
____________
*I'm hardly going to fail him am I! I'd like to avoid his irate and "eccentric" parents.