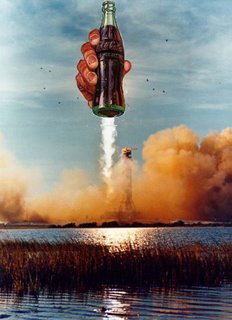 Theo's experiments demonstrating that the Apollo Moon landings couldn't possibly have happened are ingenious and compelling. However to put the matter beyond doubt, I offer another line of corroborating evidence.

This is a photograph of the alleged "launch" of the Apollo 9 mission. It was given to me by a conspiracy theorist yesterday. (At the time, he was gently raving to non-one in particular under a railway bridge while apparently trying to catch butterflies in his mouth - but otherwise he seemed to be perfectly sane.)

If you look closely, you will see that the "rocket" is in fact a coke bottle.

I am frankly amazed that so many so-called intelligent people have been fooled by this blatantly obvious fakery for so long. Thank God for conspiracy theorists. Where would we be without them?
______________
Tagged - Conspiracy Theory, Moon Landing, 9-11, Fallacy, Skepticism.
Posted by Jef Clark at 8:36 pm