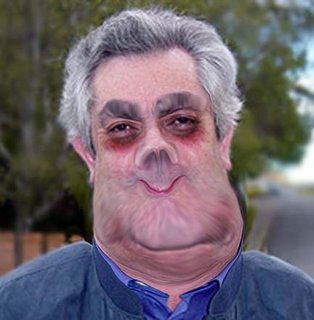 I haven't posted for a while so I feel guilty about leaving the running to Theo. Best solution is to whip up a gratuitously mocking distortature. It's fun, it's easy, and as it happens, the portrait relates to the previous post - so it seems relevant and timely.

Of course it's not - I just like mocking prigs. (This wasn't a typo, I really meant prigs - although the other word also fits Professor Robert Manne - not literally you understand.)

This face speaks to me of self-indulgence, onanism, snottiness, arrogance... the epitome of the loathsome and useless academic. But that's just my impression from afar. For all I know he might be a very nice man when you get to know him personally.