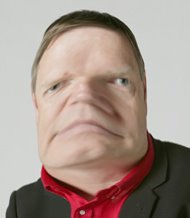 …and gets a little confused using some ethical terms in We're running on empty (28 apr 06):

… that cars are a sinful luxury that choke the air and clog the roads. Tax us more and we might even be moral and take a train instead.

But our cars are a public good.

Taking a simplistic view of ethics*, we can summarise it as working out what is "the good" and "the bad". Only agents can be the causes of "good" and "bad" acts. Given this, cars are neutral with respect to morality (as are guns, knives, H-Bombs and bunny rabbits) as they are incapable of making decisions, they are inanimate after all. It's what agents do with them that make an act moral or immoral.#

We use them to take the children to school or their sports. We use them to go to work across town, where trams don't go, or to zip when we need to rather than waste good family time waiting for a bus.

We use them for shopping, or bringing stuff we made to people who want to buy it. We use them for taking a break with the family, catching up with friends, or touring our lovely country.

Perhaps he has a point. However, even though he gives a brief mention to car pollution, he has Stacked the Deck by ignoring many other personally tragic problems with cars. Here are the road stats just for Queensland. Yes families can take their children to school and sport, but families are destroyed by cars everyday - remember this Andrew?

If a hit in the hip pocket makes people think about their personal, immediate (financial) consequences, and this results in consideration of other methods of transport, which still lets us do "good" things, but minimises "bad" things, then sweet. Eg, a "good" that can come from not driving, is walking a bit more, which in turn could help the spatially challenged lose excess boing boing. (The recent photo I found, posted above, showing the steadily increasing girth of Andrew is proof positive of this need.) If it does add an extra 3.8 Billion to the economy (if we don't cut off 10c/litre), also sweet.

So why won't the Government make petrol cheaper?

Exactly. We won’t notice. All a cut will be is a (about 6 months) buffer. Preferably the big program will be on one, some or all of: Education, Science, Renewable Energy (eg, biofuels that will be the future of cars), Agriculture (drought). Just some stuff that's essential for Australia's future. If that's what the Howard government actually believes, then they're probably right.


Update (2nd May): couldn’t help myself and posted a comment, based on the above post, at the Andrew Bolt forum (it's in the bottom half). Go there and have a look, see if you can spot the Strawman Fallacy in his reply and I might even do something nice for the first person to email me the correct answer (before his next forum where the answer should be).

Another trick he uses in his reply to me is the Fallacy of Ambiguity: You mistate what I said in order to correct me. I said cars were a "public good", not that they will or intend good. To object to this term is to object to English both everyday and plain in meaning – such as that "this food is good", "that was a good kick" and more.

Ambiguity occurs when a word or phase has more than one meaning. As I said in reply to his reply: You mistate what I said in order to correct me, also, viz: "This food is good", "that was a good kick". That type of "good" or "bad" is to do with the quality, as opposed to morality, whereas the "public good" is a moral argument.

Ie, "good food" means the food is of high quality, whereas "good boy Andrew", means Andrew is doing the right thing. The word "good" has completely different meanings in these two cases and as such his reply is meaningless as a rebuttal. He could also say, "this food is delicious", "that was a ripper kick" but then, by his reasoning, he'd have to say "public delicious" and "public ripper". I guess that has a certain "ring" to it (I mean the jewellery kind of ring, which also makes no sense).

I have no idea if walking is on balance (a concept that seems missing from your response) better than driving. If it was, we'd all be walking to work and to our next holiday spot. Instead, we no doubt figure that walking to Sydney could well kill the grandparents, as would carrying my shopping all the way from Coles finish me.

My comment on walking was merely to point out that if it's a reasonable distance (1-2km) down to the local shops, school, sports field etc, then maybe it's a good thing that people consider a walk? I did say "walking a bit more" after all, not "walking to Sydney" - Bolt's strawman of my position.

Bolt's reply to my reply to his reply to my original comment is in his May 3rd Forum. The dismissive tone of his reply leads me to suspect I "won", but it also hurt my feelings, so I'm now done.

# If you really do want to assign "goodness" or "badness" to things, the most you could argue a thing is bad or good is if it's purpose is purely to do a bad or good thing. I don't subscribe to this view, as it's not very helpful when assigning praise or blame to someone, which is the overall point of morality.

^ I drive a fair bit, but I'm aware of the consequences and certainly believe I ought to be burdened with some of the financial part (and hopefully none of the other negative consequences).