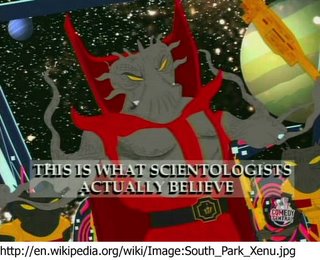 …Scientology is widely known for its use of "auditing," a form of one-on-one counseling in which a lie detector-like instrument called an E meter is used to help a person erase negative experiences, assertedly freeing him to achieve his full potential.

The group bases its beliefs on the writings of L. Ron Hubbard, the reclusive science-fiction writer who in the early 1950s published the best seller "Dianetics: the Modern Science of Mental Health."

What is rarely discussed, however, is Hubbard's secret teachings, which reveal his thoughts on why mankind has been plagued by problems through history, the topic of the disputed documents.

…they suggest that a major cause of mankind's problems began 75 million years ago, when the planet Earth, then called Teegeeach, was part of a confederation of 90 planets under the leadership of a tyrannical ruler named Xenu. Then, as now, the materials state, the chief problem was overpopulation.

Xenu… decided to take radical measures to overcome the overpopulation problem. Beings were captured on Earth and on other planets and flown to at least 10 volcanoes on Earth.

…H-bombs far more powerful than any in existence today were dropped on these volcanoes, destroying the people but freeing their spirits -- called thetans -- which attached themselves to one another in clusters.

After the nuclear explosions… the thetans were trapped in a compound of frozen alcohol and glycol and, during a 36-day period, Xenu "implanted" in them the seeds of aberrant behavior [sic] for generations to come. When people die, these clusters attach to other humans and keep perpetuating themselves.

Before a Scientologist can learn about these thetans and how to eradicate them, he must go through a progression of costly programs.

Another candidate for the WTF? Fallacy. As in: "WTF? People actually believe this crap?" The above was from a court case in which Scientologists wanted these secrets kept secret:

In arguing to keep the court documents sealed, the church has told its members that it could be physically and spiritually harmful for them to learn about the upper levels of Scientology before they have mastered the preparatory courses.

Scientology's chief attorney, Earle Cooley, said outside the courtroom Monday that unsealing the materials amounted to "the biggest threat to this religion so far."

Gee, I wonder why he thought it a threat - that they needed to keep such beliefs secret until after thousands of dollars of payment? I am often left incredulous at such credulity. Was his prediction right? Well this court case happened over 20 years ago, so I guess not. Scientology was always going to survive as there really is a sucker born every minute, or at the very least suckers have kids every minute.

He said the materials were stolen from the church and altered to hold the church's beliefs up to "ridicule, hatred and contempt" -- allegations that attorneys… deny.

So he admitted the "church's" beliefs are ridiculous and worthy of contempt... Oh, they've been altered. Hang on a minute? They can't have been altered in any significant way, given the "church" argued: "it could be physically and spiritually harmful for them to learn about the upper levels of Scientology before they have mastered the preparatory courses."

Well, if Xenu etc, isn't actually what they would find out after the required payments training, then there's no worries, surely?

Note that my meagre Scientology bashing has nothing on these guys.