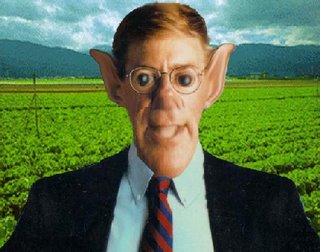 I'd probably classify this fallacious thinking as Exaggerated Conflict - The advocate claims that because there is some degree of uncertainty in a domain of knowledge, nothing at all is certain.

But was unable to do so thanks to their spam filtering software. So posting here is the next best thing.

Their post is on this opinion piece, Let Cooler Heads Prevail, by Washington Post columnist and lettuce muncher George F. Will. They specifically take issue, as do I, with this paragraph (though he has a high HF - Humbug Frequency - throughout his piece):

While worrying about Montana's receding glaciers, Schweitzer, who is 50, should also worry about the fact that when he was 20 he was told to be worried, very worried, about global cooling. Science magazine (Dec. 10, 1976) warned of "extensive Northern Hemisphere glaciation." Science Digest (February 1973) reported that "the world's climatologists are agreed" that we must "prepare for the next ice age." The Christian Science Monitor ("Warning: Earth's Climate is Changing Faster Than Even Experts Expect," Aug. 27, 1974) reported that glaciers "have begun to advance," "growing seasons in England and Scandinavia are getting shorter" and "the North Atlantic is cooling down about as fast as an ocean can cool." Newsweek agreed ("The Cooling World," April 28, 1975) that meteorologists "are almost unanimous" that catastrophic famines might result from the global cooling that the New York Times (Sept. 14, 1975) said "may mark the return to another ice age." The Times (May 21, 1975) also said "a major cooling of the climate is widely considered inevitable" now that it is "well established" that the Northern Hemisphere's climate "has been getting cooler since about 1950."

Not only is he using Exaggerated Conflict, he's Stacking the Deck by selecting only articles that predicted cooling. Here's some of the history of Climate Change Science:

In the early 1970s… Alongside the greenhouse effect, some scientists pointed out that human activity was putting dust and smog particles into the atmosphere, where they could block sunlight and cool the world. Moreover, analysis of weather statistics showed that a cooling trend had begun in the 1940s. The mass media (to the limited extent they covered the issue) were confused, sometimes predicting a balmy globe with coastal areas flooded as the ice caps melted, sometimes warning of the prospect of a catastrophic new ice age… The only thing most scientists agreed on was that they scarcely understood the climate system, and much more research was needed.

Now, regular readers of this blog will know that I'm not one to Impugn Motives, but I can't help suspect that Will, motivated by an insatiable need for lettuce, wants the world to warm up (as lettuce will be in greater abundance than ever). Thus he tells us to not worry about climate change. (Best joke I could come up with I'm afraid - the guy "kinda" looked like a rabbit before I distortatured him...)

Update: And in Will's corner we have Bullwinkle blog and an impossible challenge:

OK, you guys who believe so strongly that the science behind the global warming scare is valid go out there and locate the link to one single study that includes any cooling effects of additional evaporation from the increased surface area of the oceans that results from a 1′ rise in sea level. Telling me it won’t have any effect isn’t going to cut it, there is no possible way to know that without first doing a study, the same holds true for saying it will actually cause a rise in temperatures, without a study it’s not proven, although I’m sure if that was the case such a study would have been done to increase the scare factor. Junk science is no better than no science at all. Any studies that have been done which have not included the cooling or warming effect of the increase in surface area of the oceans with a rise in level is incomplete and invalid. It’s time to put up or shut up. I’m waiting…

It's an impossible challenge because science doesn't prove anything (but rather, gives evidence towards - see Occam's Razor as to why we give favour to a particular hypothesis over another). It's also a nice example of The Burden of Proof fallacy.

Plenty of great science has been done on climate change as I've posted before. Essentially he is claiming that cooling will occur because of increased ocean surface area. A good testable hypothesis, but it's his hypothesis and it's his job to "prove it".

Update 2: My comments are now on The Non Sequitur post (repeated - thus making me look an idiot!). I'm assured that the spam filter's viscousness levels will be lowered, so more luck in the future I hope.