I blame the parents 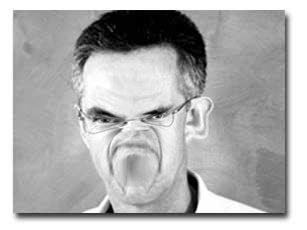 Steve Biddulph has written a new book Raising Babies, which attacks the idea of putting infants into childcare (they can be left with permanent facial problems, such as excessive frowning, as he demonstrates). I haven't read it (and being illiterate and poor I have no intention of doing so either), but from Janet Albrechtsen's column in The Australian, it seems his detractors are coming out in force. Before getting to that, here is some of Albrechtsen's summary of the research in Biddulph's book:

…recent research into the brain that reveals a baby's brain grows new pathways in response to love and affection given in the first two years of life. As Biddulph says, "more happens at this time than all the later years in expensive private schools can ever offer". Add in the longitudinal research that reports that three times as many children who spend more than 30 hours a week in child care had more noticeable behavioural problems than children in care for less than 10 hours a week.

Without getting into specifics about the validity of Biddulph's thesis*, let's examine some of the many fallacies forwarded by Biddulph's critics (still from Albrechtsen's column, so I am taking her word for it):

In London's Daily Mirror, Richard Hammond fobbed it off as follows: "someone went round asking murderers and tax-dodgers if they'd been to nursery school ... and came up with this rubbish". He told readers to ignore "fly-by-night muppets quoting preposterous surveys about how to raise your child".

Here we can see Hammond is engaging in False Positioning. It seems to me that Biddulph has based his argument (a whole book after all) on more than "asking murderers and tax-dodgers if they'd been to nursery school". Hammond also goes for straightforward Personal Abuse, "fly-by-night muppets", compounded with the Weasel Word "preposterous". The next article Albrechtsen cites:

In The Sunday Telegraph, Tim Hayward, whose daughter went into child care at six months of age, said it was just another book "to make me feel guilty ... it just makes me cross".

So the thesis of the book is false as its purpose is: "…to make me feel guilty"? No, but Impugning Motives might make a guilt ridden parent feel better I guess. Perhaps making parents feel guilty is what motivated Biddulph, but his motivation is irrelevant with respect to his case (if he's wrong, you've got nothing to feel guilty about anyway). I bothered to find the original article, I feel guilty but my daughter loves it from the Telegraph; there was even more humbug:

Liberty Hayward will be three in April and has been in full-time child care since she was six months old. So has this experience made her aggressive, depressive, antisocial or incapable of forming close relationships?

Oh, yeah! She's a total psychopath," jokes her father, Tim Hayward, 42. "She's none of those things. I've read a lot of this stuff and, obviously, one's always looking out in case things like that develop but, to be honest, we're still getting people saying: 'My God, she's wonderful, she's so well-behaved, she's such a nice kid, she's so friendly, she's so gregarious.' "

But surely Mr Hayward's daughter must be displaying some psychotic traits or nascent mental health problems by now? Mr Hayward laughs. This is not the reaction of someone who believes his child has been starved of love and affection, to the detriment of her cerebral development...

We have two specific fallacies here. Again we have False Positioning. From the point made in the Telegraph, you could be forgiven (though personally I would find it hard to forgive such an asinine error) in assuming that Biddulph argues that all children left in childcare will definitely become delinquents. Here's more of Biddulph's actual argument (according to Albrechtsen):

Studies by the National Institute of Child Health and Development of more than 1000 children highlight problems such as "disobedience, being defiant ... getting into fights, showing cruelty, bullying or meanness to others, physically attacking other people, being explosive and showing unpredictable behaviour". While the increase was small, it was spread across a large number of children.

So we have a small increase in problem behaviour over a large sample. (You would expect only a few of the individuals in the sample to be at the extreme end.) This leads into the second fallacy. Asking one person if their baby is messed up (as evidence that childcare doesn't have an adverse effect) is an Unfounded Generalization, specifically a generalization from a 'sample of one'. Anecdotal evidence is simply not evidence. It's not based on research that takes into account all the variables (with the use of controls). It is often wrong or exaggerated and the anecdotes (usually) are based on individuals. One cannot extrapolate a generality from such a small sample. That's why the study cited above used more than 1000 test subjects.

One final fallacy from Sue Dunlevy, Lets be grown-up about childcare, (who's been a target before):

She goes on in this fashion, following it up with:

…this guy needs to get real. He says kids should have at most only a short day with a carer until they are two, and two short days in care until they are three. We can't all live in Steve Biddulph's ideal world, and with most kids using care for only about two days a week, we're not doing too badly.

Notice how Dunlevy changes the argument from "whether or not childcare is bad for young'ns" to "we don't have young'ns in childcare a whole lot"? She has Moved the Goalposts. Yep, it may be true Australians don't use childcare a whole lot, and obviously we can't all live in an ideal world, but that's got nothing to do with the effects of childcare on a child's development - Biddulph's argument and her original point. No, Dunlevy. It is you who needs to get real!

Now, I might have been a little harsh on all these writers. After all, for all I know it's not their fault they're filled with such idiotic antipathy towards Biddulph. They were probably left in childcare as infants. I blame their parents.

____________
*Not that I could, given I haven't read the book. However, my boy (2 months old) isn't going into childcare. I don't need a book to tell me being looked after by Mum and Dad (not that this is always possible of course) in one's formative years is better for the development of the brain, than being looked after by strangers. If you honestly believe a stranger is just as good, that your efforts with your child are not the most important… don't have one. This is to not bash childcare centres, or those who use them, but let's deal with reality. (See the Fallacy of Wishful Thinking if you've a problem with that.)