The Biggest Douche in the Universe 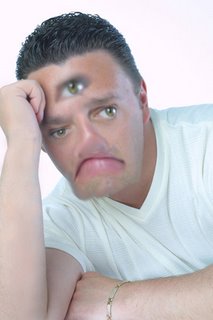 This is my first post on the Wishful Thinking Fallacy. It is based on a conversation I had with a workmate when I was working my way through uni, as a causal in an inner city department store in Brisbane (at the high point of the Queen St Mall). I'll leave it to you to work out who is who…

Gull A. Bell is discussing the recently aired TV show, Spirit Origins, Real and Extreme - A Supernatural Special, with his acquaintance, Uray Toole. Gull explains to Uray that the host of the show communicates with the dead:

"It was incredible! He knew all sorts of stuff, that there's no way he could have known, about the recently passed relatives of the audience members."
"What are you on about? The host is the Biggest Douche in the Universe, the show is clearly rubbish and…" Uray Toole, at this point is interrupted by Gull.
"It's not rubbish, it's true, because it'd be brilliant if we could communicate with the dead. I could then talk to my recently passed goldfish... He must have the Third Eye!"

Comment
Perhaps [cough] people can actually speak to the dead. Though I'm am completely unconvinced of this*, being able to speak with the dead would be quite fantastic. That is, many people wish this to be true. When pondering why one believes something, it is a good idea to consider how much "wishful thinking", rather than actual evidence, is playing a part in a belief. This is not to say that the belief couldn't be right, but to actually argue for a belief, one needs evidence. With regards to charlatan certain TV shows, from the point of view of an individual sitting at home and watching, believing that the host can actually speak to the dead is clearly the Fallacy of Wishful Thinking. Off the top of my head I can Spin a few Hypotheses, all equally valid with regard to the evidence at hand, that explain what the host is doing:

1. He is actually speaking to the dead.
2. It is all completely fake - every person on the show is a paid actor.
3. He is an expert cold reader. He uses various techniques, such as asking general questions to feel out specific details for an individual; the human habit of Observational Selection, on the audience's part, does the rest.
4. The same as 3, but added to that - planting agents in the audience before the show to gather information.
5. Same as 4, but on top of that the "creative" editing could help it win Best Film at Cannes thanks to Stacking the Deck and False Attribution.

And so on... Given the lack of evidence we have (as individuals watching from home) for "speaking to the dead", we can't come to a firm conclusion either way. And we certainly have no good reason to believe the All Supernatural Special reason. People come to believe such claims, therefore, not based on evidence, but on unfounded belief. If anything, we should give favour to hypotheses 2, 3, 4 or 5, simply because we know for sure that there are frauds, and that it can be faked.

________
*I wouldn't dismiss it out of hand either, but call me pedantic, I just have this thing where I require a good reason to believe something.