Will you "contractually government register our relationship(s)" with me? 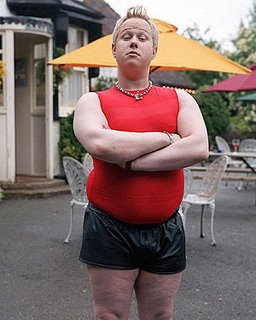 Do you think Daffyd should always remain “the only gay in the village”, but don't want to be accused of being a homophobe? Then follow Katherine Kersten of the Star Tribune onto the slippery slope:

The fact is, once you adopt same-sex marriage -- legally changing the standard for marriage from one-man, one-woman to a "committed relationship" -- there is no principled way to prevent its extension to polygamy or other forms of "plural marriage" or partnership.

This in itself isn't necessary fallacious, as does explain how it could happen (though why polygamy is bad is assumed to be self-evident), but one is certainly getting a whiff of slippery slope. A whiff becomes a distinct, no-doubt about it, stench ridden Slippery Slope fallacy with:

What's the likely endpoint? Marriage may be redefined out of existence, and replaced by a flexible, contract-based system of government-registered relationships. So get ready. Today gay marriage supporters' mantra is, "How does my same-sex marriage harm your marriage?" Down the road it may be, "How does my marriage of two men and a woman harm your marriage?" If we don't answer the first question with resolve -- making clear that "one man-one woman" is at the heart of marriage in Minnesota -- we may not have a chance to answer the second.

Absolutely. That’s a dead certainty. If we allow man-o-man (which she can't just admit she's against on principle), we'll do away with marriage altogether, and just be obligated to each other contractually…

From the little I know on this issue, the purpose of legalising gay marriage is to give man-o-man and woman-o-woman partners the full legal rights as man-o-woman. To recognise these relationships for what they are, in terms of financial and familial rights and obligations. I for one, can't really see how this is bad.

That's marriage from a purely legal and civil viewpoint. But marriage, the traditional religious type, will stay just how it is in most religions (with a few notable exceptions). That's where (ultimately pointless) arguments on the "true" nature of marriage can be had. But at the end of the day, it's entirely up to you, and your spouse(s), to define what your marriage means to you, irrespective of the law.

Her Slippery Slope argument against gay marriage completely ignores criticising gay marriage. This is what makes it so clever, and seemingly legitimate. Instead of attacking gay marriage on principle, her argument is, "Fine. There’s no problem with gay marriage per se. But even though this might be the case, if we allow gay marriage, we’ll have to allow anyone to marry anything, Not only this, marriage will eventually be nothing more than a system of contractual obligations, and it will lose all it’s meaning. Therefore we shouldn’t allow gay marriage."

Cunning as Mr Fox on the cunningest day of his life (apologies to Blackadder - I think), but fallacious.

Another way to look at the speciousness of her argument is by Inversion and Reductio Ad Absurdum. By impeccably following her logic in the other direction, we should actually ban all marriages. After all, if we allow men and women to marry, how do we say no to men and men; women and women, getting married? We can't. And without a doubt, this will lead to the collapse of Western society!
Posted by Theo Clark at 10:25 am