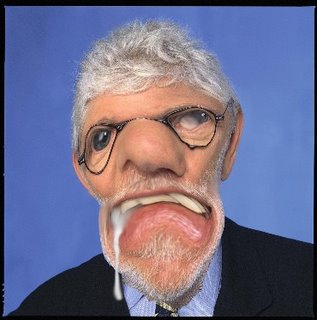 Browsing around the blogosphere I came across this post at the evolution blog responding to this piece of moronic anti-algebra drivel (or perhaps, dribble?) by Richard Cohen in the Washington Post.

There is too much pointless pontificating and far too many fallacies for me to be thorough, and the evolution blog post covers the whole thing, so I'll focus on half of one paragraph in Cohen's piece:

Gabriela, sooner or later someone's going to tell you that algebra teaches reasoning. This is a lie propagated by, among others, algebra teachers. Writing is the highest form of reasoning. This is a fact. Algebra is not. The proof of this, Gabriela, is all the people in my high school who were whizzes at math but did not know a thing about history and could not write a readable English sentence.

So much rubbish in not even one paragraph - where to start?

Mathematics is by definition the strictest form of reasoning, precisely because everything is defined by mathematical axioms which result in tautological statements such as: "For the equation y = 2 x, if x = 2, then y = 4." Simple logic. You can't get any more "reasoned" than that.

Writing is the highest form of reasoning. This is a fact. Algebra is not.

Okay? And just how is this "a fact"? I'd say Cohen is guilty of a Factoid Propagation, but I find it hard to believe anyone would agree with him. . Cohen beclowns himself by not being able to communicate what he means. Does he mean: "Algebra is not a fact", or Algebra is not the highest form or reasoning? His syntax implies the former.

He then "proves" that writing is the highest form of reasoning:

The proof of this, Gabriela, is all the people in my high school who were whizzes at math but did not know a thing about history and could not write a readable English sentence.

(Given Cohen admits he is incapable of doing the most rudimentary mathematics, such as percentages, I won't assume he was actually able to count the total number of students in his school. It's hard to see how he can make this claim of "...all the people...".)

Fallacy 1 - Non-Sequitur. How does this "evidence" prove writing is the "highest form of reasoning"? All it "proves" is that the other people in his class were as stupid is he is; just in different ways.

Fallacy 2 - Making up anecdotes is a clear case of False Attribution. We are asked to take Cohen's word for it, that: "… all the people in my high school who were whizzes at math…". Wow, he has access to all their grades, and has since checked up on all of them to ensure his claim is factually correct.

Fallacy 3 - Unfounded Generalization. Let's give him the benefit of the doubt and assume he is correct in his claim that all the people he went to school with couldn’t write if they could do maths. Clearly, by implication, it then follows that all people who are good at mathematics can't write, or, you know, do anything else important, like tie up their own shoelaces. Given Cohen's lack of mathematical knowledge, I suppose we can forgive him for not understanding that his entire school is far too small a sample to extrapolate from in order form a meaningful position apropos to the likelihood of any one individual being a polymath. However, Cohen doesn't even have any actual data, just a (made up) anecdote.

A side note regarding anecdotal “evidence”. One doesn't have to have any knowledge of statistics to understand anecdotal evidence is as good as useless – especially as a "proof". Moreover, this anecdote is merely the assertion of one person. And even if more that one person was to make the same anecdotal assertion, the plural of anecdote is anecdotes, not data.

Cohen is a great example of this aphorism: "To be ignorant of one's ignorance is the malady of the ignorant."