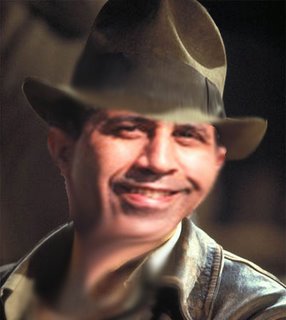 Gary Curtis posted over at Fallacy Files, and gave an example of False Attribution in the (US) ABC's report on the "discovery" of Noah's Ark. In the caption of the satellite image they state:

Some experts think that these satellite images may be of Noah's Ark.

"I see for a 1,015 feet in length a shiplike object that has almost unbroken symmetry," said Porcher Taylor, an assistant professor at the University of Richmond.

Thus we have a False Attribution.

It gets worse. It turns out Taylor is "…a professor of national security law" (I checked him out further and all his expertise is in other non-Indiana Jones fields too) - not much of an expert. Though he has "…spent the past 13 years on a quest to discover what is on Mount Ararat, the area where the Bible says Noah steered his ark through raging floodwaters." That does sound like very reliable research to me.
Posted by Theo Clark at 9:41 pm