Singer and the Slippery Slope fallacy 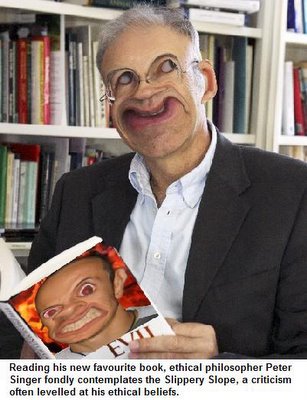 
For example, Singer favors euthanasia of the old whose minds have declined, but it's not hard to see that if "voluntary euthanasia" became common, bullies would take what he had wrought and apply pressure on the elderly or the disabled to get out of the way rather than use up resources.

Similarly, Singer says that parents up to a year or two should be able to kill children with physical or mental problems, with the OK of a group of Singerists on hospital ethics boards. That's gruesome enough, but if infanticide under "strict" conditions were legalized, the conditions would soon be loosened, reporters would discover inequities where it was allowed in some circumstances and not others, and infanticide on parental demand would become standard. That's what happened with abortion.


Given we accept A, it follows that be B will inevitably occur. (Note this is stated as fact, without any justification.) Event A occurs which in itself is of no concern. But A causes a series of steps that lead to B which is an undesired outcome. Unless evidence supports this claim, in the form of causal links between A and B, it is incorrect to say that A will definitely cause B.

Flavour two is the historical argument:


Event A occurs which in itself is of no concern, and while it will not definitely lead to event B, we can judge that B is now more likely to occur. We make this judgment based on similar cases in the past where this has occurred. That is, event A increases the probability of event B. It is important that the historical example be similar. It is also important that the advocate is not making a False Analogy.

In this case the Slippery Slope has merit. It is advanced as an argument of probability, based on evidence - usually (appropriate) historical examples.

In Olasky's examples above, we can see he forwards both flavours of the Slippery Slope. In the first he claims that if we accept voluntary euthanasia, inevitably we will accept involuntary euthanasia. He provides no evidence and no justification and is fallacious. The second example (on infanticide) is much the same and Olasky is still fallacious; his argument assumes certainties, not probabilities. However, in adding: "That's what happened with abortion." he is providing some historical evidence for his Slippery Slope claim and assuming we accept this evidence, his argument now has some merit. (Though he hasn't shown why these two cases are similar and his one sentence on abortion smells like a Factoid Propagation to me.)