Fake but True an Argument by Artifice 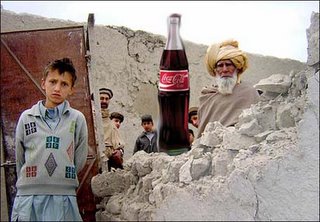 A fake but true image was recently posted at a major news site. (See photograph and context here.) The photograph purported to show damage wrought by a predator missile in a village in the border area between Pakistan and Afghanistan. The actual ordinance shown in the photograph however was an unexploded artillery shell.

I have added a further level of fakery in the photo to highlight the involvement of big business in "war-type corporationy activities" (Alec Baldwin, the greatest actor in the whole world).

Just kidding. The fake but true defence for false claims is trotted out with monotonous regularity (see plastic turkeys). Fake but true is an example of Argument by Artifice: "The advocate puts forward convoluted and weak assertions which... (are) artificially constructed" (source: Humbug!).
Posted by Jef Clark at 8:39 am