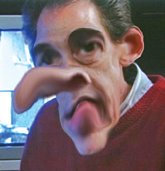 I've already posted on 911 in Plane Site, but it's pure gold for a "fallacy finder" such as myself. In response to a review of the show by Gordon Farrer of The Age, the conspiracy theorist and delusional paranoid (note my continued Personal Abuse) Dave "The Dirty One" von Kleist, motivated, only by an insatiable need to become a famous country singer (note that I am Impugning his Motives) serves up a few more:

On our radio program, we have interviewed a two-star General, an Air Force Colonel (with 30 yrs. identifying aircraft ant aircraft parts), an Army Major, Air Force Major, a 33 yr. veteran of the DoD in missile defense systems, numerous Airline pilots including an instructor, and the United Airlines pilot who flew Flight 175 up to two months before 9/11 when he retired. They agree that a 757 could not have caused the damage at the Pentagon and that the planes that hit the towers could not have been commercial aircraft. That is their opinion not mine.

Now, how many of these "experts" have seen a 757 fly into a building before or after 9-11? None I'll wager. Yet somehow, by merely looking at photos, they can tell that it's impossible that a plane caused the damage? "Attributing Authority" to these people is fallacious for two reasons. False Attribution - as the sources The Dirty One cites aren't "experts" in the correct field, they are made up of people who are irrelevant (at best marginally relevant), unqualified, and unidentified (and for all we know - non-existent). (The correct "experts" I assume, would be from the fields of engineering, ballistics and demolition.) And two, Appeal to Authority - Dave does not explain why they hold this view, but merely presupposes their "eminence" will suffice as an argument.

The Dirty One continues:

What "experts" can you bring forth to support or justify your condemnation of the hard photographic evidence presented in the film? I would be most interested as to what your explanation would be in regard to the "pod" and the "flash" is. How do you explain the Pentagon photos and footage taken before the collapse of the "E" ring? I noticed (and so did many of your readers) that you didn't address any of these issues. In fact, you didn't address one issue, not one. I would challenge you to do so however, coward "journalists" usually throw their rocks, shoot their arrows and then run and hide. Prove me wrong.

Ah, the Burden of Proof fallacy. One of my "favs". Dave has no actual evidence for his case (like footage of a missile or eyewitness accounts), he merely makes spurious claims with selective use of videos and photos. So instead of making his own case with actual evidence, he says: "If you can't prove me wrong, then I must be right." Well, lots of people have "proved you wrong".

The above link serves to demonstrate The Dirty One's Deck Stacking. All his claims are bogus. One example of a bogus claim is when Dave argues: "If it was a plane that hit the Pentagon, where's the wreckage?" To which he shows photos where wreckage can't be seen (and implies he has looked at all the photos there are). Well, here's one Dave! Oh, I see, you have seen it. Of course! The wreckage was planted… and the photo only came about months later? Question! Why would "they" wait to release a photo of "planted" evidence Dave?

I know a little physics, and I vaguely recall some terms - work and energy. Reminded of this I thought to myself, in order for a plane travelling at a high velocity (large Kinetic Energy) to come to a halt, something would have to do work on it (apply a force over a distance). If the force was relatively small (like the resistance from brakes and air), the distance would be quite large (say, at least the distance of a runway). With a bigger force (perhaps resistance from a building), the distance would be smaller (say, the distance to travel completely inside the aforementioned building). Given the plane travels inside the building, it's hardly a surprise that the wreckage of the plane is also in the building (for where else could it be?) which then, due to loss of structural integrity, collapses on top of the wreckage.

Dodgy Dave, in his "documentary", also likes to use eyewitness accounts. He only uses a couple to help his cause, but fails to quote the hundreds of other eyewitnesses. Yet more Stacking the Deck.

If you need any more evidence that Dave "The Dirty One" von Kleist is a liar - re-examine the photo of him. It was taken after a questioner asked Dave if he was taking any of these. Dave initially responded "No", but when he realised his "tell" (Pinocchio Syndrome) had given him away, he got all grumpy.