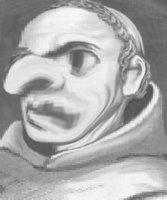 Franciscan Friar William of Occam nominated a principle which has since been called Occam's Razor:

Entities are not to be multiplied beyond necessity.

The way I put it:

If there are two (or more) equally valid, but conflicting hypotheses for an observed phenomena, one should choose the hypothesis that requires the least number of steps to explain it.

If you have different explanations for something, all of which can explain it equally well, then you have no reason to choose a complex reason over a simple one. (KISS - Keep It Simple Stupid.)

Note that the essential criteria - explain it equally well - must be met before applying Occam's Razor. (Obviously one always goes with the hypothesis that explains "the something" best.) Occam's Razor is no guarantee of truth or even of likelihood, but it is not invoked as such. It is a rule of thumb that is used to give provisional acceptance to a hypothesis. The provision is that, until evidence comes along to give greater weight to an alternative hypothesis, it is best to stick to the simplest one.

As Occam is quoted to have once said: "It is vain to do with more what can be done with fewer."