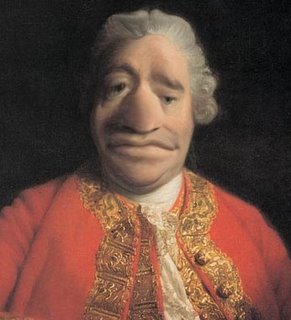 In his work "Of Miracles" Philosopher (and avid wig wearer) David Hume nominated a principle which has since been called Hume's Razor:

"No testimony is sufficient to establish a miracle unless that testimony be of such a kind that its falsehood would be more miraculous than the fact which it endeavours to establish."

If we are asked to believe X, in deciding whether to believe it (give provisional consent) or not we should ask: "Is it more likely that X is true, or that the evidence for X is mistaken (or can be interpreted in a different or more realistic way)?" If it seems that it's more likely that the evidence is wrong, then we don't believe X. Putting it simply - extraordinary claims require extraordinary evidence.

9-11 Conspiracy theorist - Aka cretinous cretin who badly needs (brow)beating
Posted by Theo Clark at 12:50 am